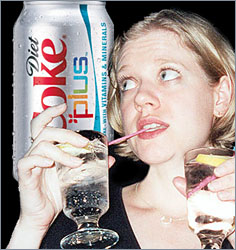 Mm, Diet Coke! I often drink it for caffeine and the fact it is calorie-free. I realize it is probably rotting my teeth, the lining of my stomach, or gods know what else.

It might make sense if calcium were added to caffeinated beverages. Caffeine increase calcium loss, or so I hear. It’s a good reason to take your coffee with milk (cow or fortified soy). Our healthy friend spinach has calcium issues, too – it decreases its absorption – but luckily it has built in calcium, so maybe it evens out. Ok, so why not add vitamins and minerals to things like soda?

Enter Diet Coke Plus… It became available in the U.S. in April, and I first encountered it last week in a drugstore. I was tired and dehydrated and had forgotten to take my daily vitamin. I thought, “Why not?” and bought a bottle. It tasted like normal Diet Coke – empty sweetness – with an extra chemical punch that almost reminded me of vodka for a second.

So what’s in this stuff? According to DietCoke.com, Diet Coke Plus is “everything you love about Diet Coke, plus several essential nutrients.” It includes B6, B12, niacin, zinc, and magnesium. No calcium, sorry. Take your supplements. (It’s only about 15% RDI of the above anyway.)

I’m not going to go so far as to say it’s good for me – in fact I’m pretty sure it is not – but if I’m drinking this stuff anyway, why not get the one with some vitamins?

Pepsi has one called Diet Pepsi Max, but it’s got ginseng and EXTRA caffeine instead. Wow. (I’ve not tried it.)

I’m actually drinking less soda than I used to, generally opting for something juice-based with lunch. I go for some flavor of Vitamin Water (by Glaceau) almost daily. It’s probably a big scam, but it feels better than drinking the brown bubbly stuff.